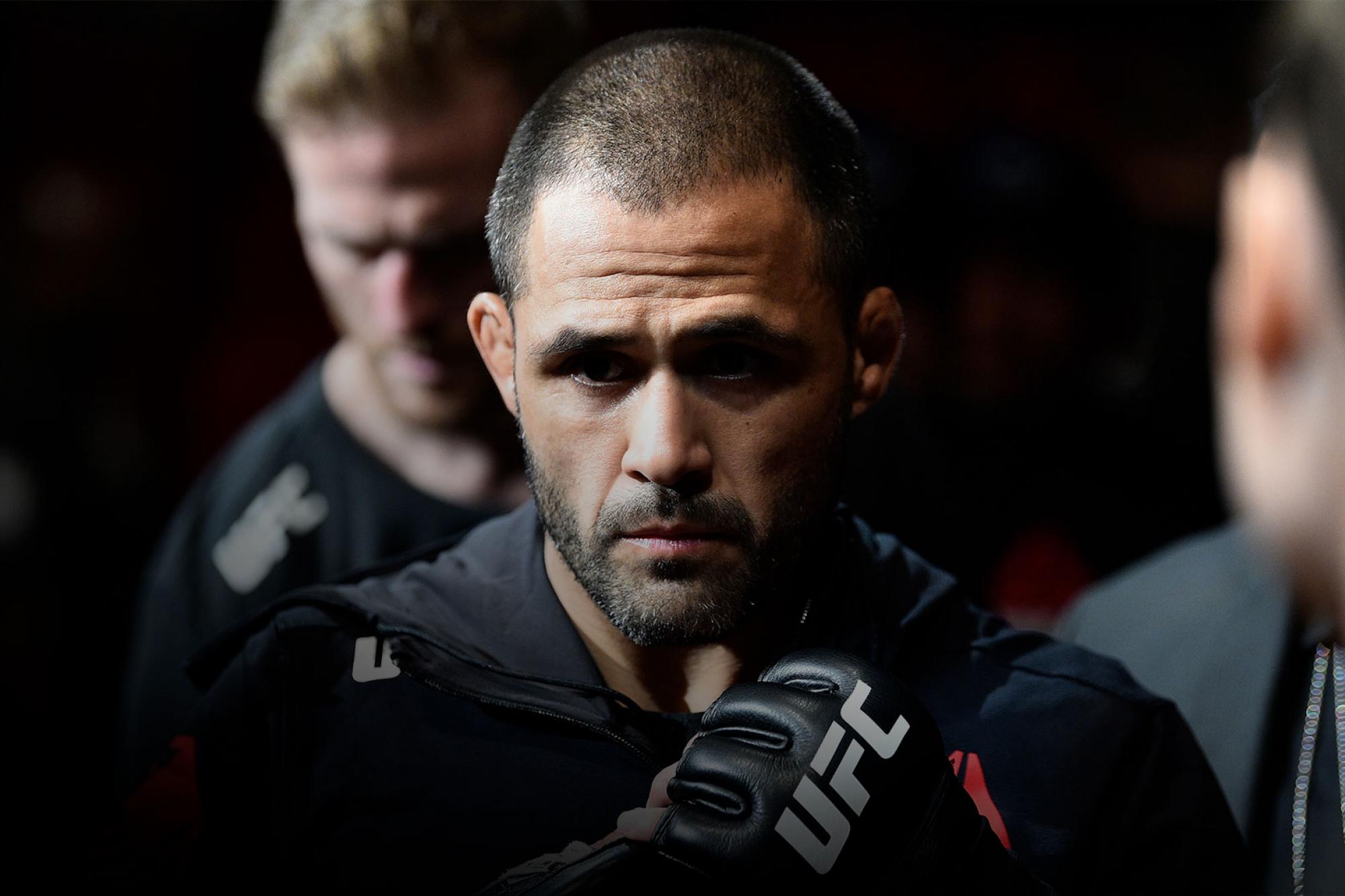 Family had as a big an impact as anything on Frankie Saenz' MMA career
By E. Spencer Kyte, on Twitter @SpencerKyte • Jul. 27, 2020

Frankie Saenz wants to have the kind of influence on his kids that his father, the man affectionately known as “Big Frank,” has had on him.

“My dad shaped who I was as an athlete growing up,” said the returning bantamweight, who squares off with Jonathan Martinez on the preliminary portion of Saturday night’s fight card at the UFC Apex. “He was there for me with Little League, Pop Warner, and then later on with wrestling. He was super-influential and put a lot of time into me; we created that bond.

“My first seven fights in the UFC, my dad was in my corner because he’s one of those guys that understood me and I felt like with him around, I could just be me.”

But it wasn’t just his son that Frank Saenz had an impact on.

“My dad was a successful coach too,” Saenz said of his father, who started the Maryvale Wrestling Club at the high school in the hard scrabble part of Phoenix. “He started a wrestling club in our neighborhood and I’m from a neighborhood out in Arizona where I tell people where I’m from — ‘I’m from Maryvale’ — and that’s the hood.”

Amongst those who spent time on the mats were Angel and Henry Cejudo, as well as former flyweight title challenger John Moraga.

“I was always older than all the guys, but my dad was that father figure for a lot of those kids growing up,” Saenz added. “He developed three UFC fighters, plus Tracy Cortez is from our same neighborhood too.”

Saturday’s bout with Martinez will be the first for Saenz since a first-round stoppage loss to Marlon “Chito” Vera last year in Nashville, an absence of more than 16 months that was brought on by the expansion of the Saenz family.

“Last year, I took a lot of time off because my fiancé was a high-risk pregnancy,” explained Saenz. “We lost a baby three years ago, pretty late in the pregnancy — so this past year, I wanted to make sure I was there for her, being supportive, which is why I took such a long layoff.” 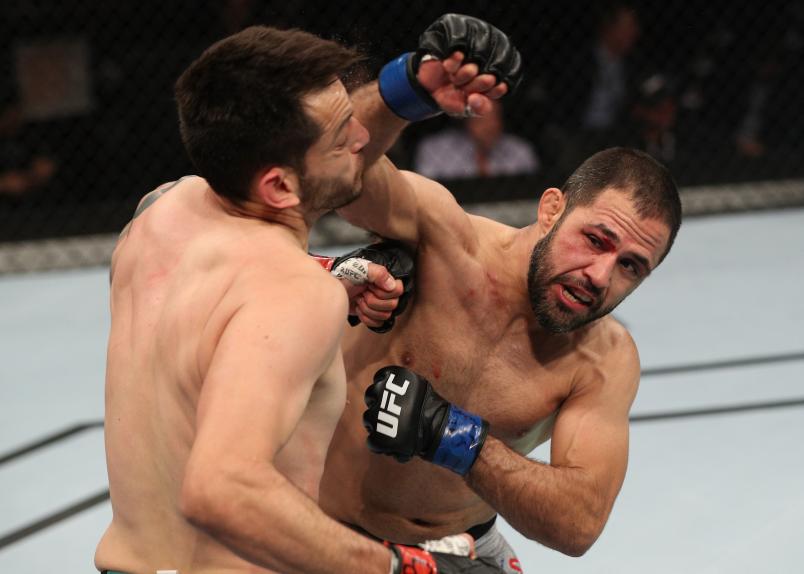 SANTIAGO, CHILE - MAY 19: (R-L) Frankie Saenz punches Henry Briones of Mexico in their bantamweight bout during the UFC Fight Night event at Movistar Arena on May 19, 2018 in Santiago, Chile. (Photo by Buda Mendes/Zuffa LLC/Zuffa LLC via Getty Images)

Now seven-month-old Luke joined soon to be eight-year-old Laila in making the Saenz family a foursome, while giving proud papa Frankie a jolt of energy similar to what he felt when his daughter was born.

“When my daughter was born, I went on a seven-fight winning streak and got into the UFC because that new fire was burning in there and it’s the same with my son,” admitted the veteran, who has gone 5-4 inside the Octagon and sports a 13-6 record, overall. “I’m the oldest dude in the division, there are a lot of people counting me out, but it doesn’t matter what they think; it only matters what you think.

“That’s something I want to relay to my kids when they get older,” continued Saenz, who wrestled collegiately at Arizona State and holds victories over Iuri Alcantara and streaking bantamweight Merab Dvalishvili. “Just go for it. Whatever you want to do — if you put your heart into it, you can accomplish anything so just go for it.

“I chose the fight game because it was always something that I wanted to do, and I started later in my life; I didn’t start fighting until I was 28. This is my passion and I want to keep going out there and putting on a show for people.”

In addition to getting to fight in front of his son for the first time, Saenz will also cross two other items off his personal bucket list when he makes the walk to the cage this weekend, as he’ll be making his 10th UFC appearance and competing after completing his first training camp with a full compliment of specialized coaches by his side. 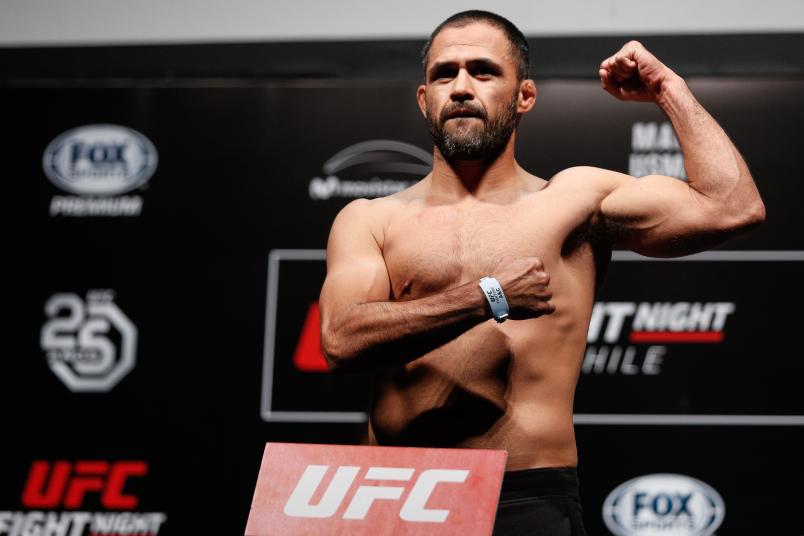 SANTIAGO, CHILE - MAY 18: Frankie Saenz of the United States poses on the scale during the UFC Fight Night weigh-in at Movistar Arena on May 18, 2018 in Santiago, Chile. (Photo by Buda Mendes/Zuffa LLC/Zuffa LLC via Getty Images)

“My goal was always that I wanted 10 fights because that to me solidifies a career in the UFC,” said Saenz, who has trained at Phoenix’s Fight Ready for the duration of his professional career, and watched the outfit expand in recent years.

“For me, I just wanted to get in tune because I’ve never really had a full team or camp of specialists, so I just wanted to get in sync with those guys and learn, absorb all this knowledge,” he said of working with coaches like Eddie Cha, Alan Viers, Angel Cejudo, and Chad Ikei in advance of his return this weekend. “I’m at a point now where this is the most complete camp and group of guys I’ve had around me and I’ve always wanted to have that.

“You’re competing against all these teams like ATT and Alpha Male and Jackson-Wink and they have specialists — striking coach, wrestling coach, strength and conditioning — and that’s just something that I’ve never had and I have always wondered, ‘If I had a full camp with all these guys, what can I do?’”

Now that he’s got that training camp behind him, how is the returning veteran feeling just a few days out from his first trip back into the Octagon since the birth of his son?

“The excitement is definitely building, and I feel like when I first got in,” he admitted, the anticipation evident in his voice. “I’m at that point where it’s, ‘Man, I can’t wait to get in there.’

“I feel like I got to a point before where I was so worried about preparation, but now I know the preparation has been done. Now I’m just looking forward to the fight, getting in there, and putting my hands on Jonathan Martinez. I haven’t had this feeling since I first got into the UFC. I just can’t wait to get in there.”

Luckily for Saenz, he only has to wait a couple more days.

Then, Saturday night, he’ll walk to the cage for his tenth UFC fight, test himself against Martinez, and if everything goes as planned, stand triumphant in the center of the Octagon, knowing that Laila and Luke are watching at home as their dad continues to set the same kind of positive example his father set for him.

“My whole family is going to be watching, and man,” he began, pausing to find the words. “Going in there, doing what I said I was going to do — it’s something special for me because I want to be motivating for my kids.”