DANIEL CORMIER VS. DERRICK LEWIS
Just four months after becoming the second fighter in UFC history to hold two titles simultaneously, Daniel Cormier makes his return to defend the heavyweight championship for the first time. Undefeated at heavyweight, Cormier is coming off a first-round knockout over Stipe Miocic, and he'll look to stamp his title reign with a first defense on Saturday night.
When his career is over, Cormier may go down as one of the best fighters in the history of the sport, but standing in his way this weekend is the ferocious "Black Beast," Derrick Lewis, who is fresh off a come from behind victory over Alexander Volkov that ended with a vicious third-round knockout at UFC 229. Lewis has won nine out of his last 10 fights, with seven of those victories coming by knockout. Lewis may be an underdog in this matchup, but that won't stop him from head hunting Cormier from the start of this fight until the finish as he looks to pull off the upset in the UFC 230 main event.

CHRIS WEIDMAN VS. RONALDO “JACARE” SOUZA
A late notice change of opponents for both fighters ended with a fight a lot of people have wanted to see for years, as former champion Chris Weidman takes on submission specialist Ronaldo "Jacare" Souza in the UFC 230 co-main event. Weidman is coming off a win over top-ranked middleweight contender Kelvin Gastelum in his last fight, so he has to know a win in this fight is paramount if he wants to get back to the title. Weidman is also looking for a bit of a redemption in his hometown after suffering a loss to Yoel Romero the last time he competed at Madison Square Garden. Souza will do everything in his power to put Weidman at 0-2 in the world’s most famous arena while he also looks to get back into title contention with a win. Souza has faced the best of the best at middleweight over the years, but coming off a split decision loss in his last fight, there's no doubt the Brazilian jiu-jitsu expert wants to get back into the win column more than anything else.
DAVID BRANCH VS. JARED CANNONIER
Fresh off a stunning knockout against Thiago Santos in his last fight, David Branch will look to continue his climb up the middleweight rankings when he faces the always-tough Jared Cannonier, who will be making his debut at 185 pounds at UFC 230. Branch is a nasty grappler trained under famed coach Renzo Gracie, but his boxing has looked better than ever in his last few fights, including that devastating knockout in his most recent performance. Cannonier will certainly be more than happy to trade hands with him as he has thrown down with fighters at both heavyweight and light heavyweight before making the move down to middleweight. This matchup might just end up as the show stealer on the main card.
KARL ROBERSON VS. JACK MARSHMAN
Expect fireworks in this middleweight matchup as former kickboxer turned MMA prospect Karl Roberson takes on Welsh slugger Jack Marshman. Roberson suffered a loss his last time out but that should only serve as fuel to the fire as he looks to get back on track with one of his signature knockouts just like the one he scored with blazing speed during his appearance on Dana White's Tuesday Night Contender Series. Marshman will have no problem fighting fire with fire as he has bricks in his hands and never shies away from a war inside the Octagon. 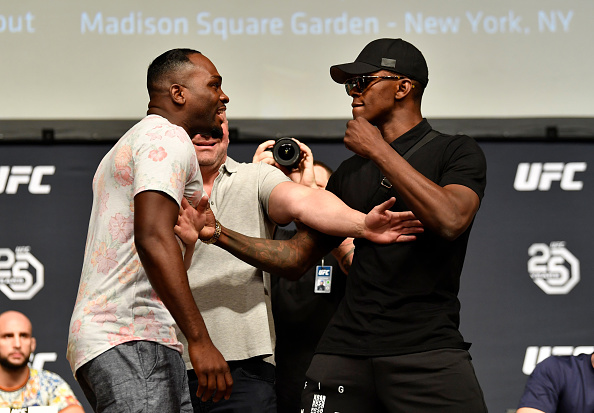 Derek Brunson and Israel Adesanya face off during the UFC press conference inside the Orpheum Theater on August 3, 2018 in Los Angeles, California. (Photo by Jeff Bottari/Zuffa LLC/Zuffa LLC via Getty Images)" align="center"" /> DEREK BRUNSON VS. ISRAEL ADESANYA
There's a lot of bad blood simmering in the fight that will kick off the UFC 230 main card as Derek Brunson takes on fast rising star Israel Adesanya. Since first arriving in the UFC, Adesayna has made waves while making a quick rise up the ranks, but he'll face his stiffest test to date on Saturday night while going up against a legitimate powerhouse in Brunson. The former college wrestler still has a suffocating ground game, but he's shown a willingness to trade bombs with anybody truly ready to exchange with him. It's safe to say that Adesanya will happily accept that kind of fight while each of these fighters looks to settle their grudge inside the Octagon.
JASON KNIGHT VS. JORDAN RINALDI
The featherweight division is like a shark tank at times and that's why Jason Knight and Jordan Rinaldi each needed to get back on track with a win at UFC 230. Knight has been riding a rollercoaster lately with three straight losses that came after four consecutive wins. Now the submission specialist will attempt to stave off a dreaded fourth loss in a row when he takes on Rinaldi, who comes into the fight with a 1-2 record in the UFC as he tries to pick up the biggest win of his UFC career this weekend.
Order UFC 230 here!
SIJARA EUBANKS VS. ROXANNE MODAFERRI
With a new women's flyweight champion being crowned in December at UFC 231, this rematch between Sijara Eubanks and Roxanne Modafferi could potentially determine the next No. 1 contender in the division. Eubanks holds a win over Modafferi from their time on The Ultimate Fighter and she'll look for an even more dominant showing the second time around. Meanwhile, Mofafferi is coming off a TKO win in her last fight and she will surely like nothing more than to get a win and avenge her prior loss to Eubanks.
JULIO ARCE VS. SHEYMON MORAES
With a perfect start to his UFC career after first debuting on Dana White's Tuesday Night Contender Series, Julio Arce will attempt to go to 3-0 inside the Octagon when he returns at UFC 230. Looking to stop his win streak will be Sheymon Moraes, who comes into the fight off his first win in the UFC while going 3-1 over his past four fights overall.

LYMAN GOOD VS. BEN SAUNDERS
It's been over a year since Lyman Good last appeared in the Octagon, but the New York native will certainly be seeking to put on a show while competing at home in Madison Square Garden. Playing spoiler will be veteran welterweight Ben Saunders, who comes into the fight with a 1-1 record in his past two bouts, including a vicious first-round knockout against Jake Ellenberger back in June.
MATT FREVOLA VS. LANDO VANNATA
Another New York native will take part in the featured prelim on Saturday night as Matt Frevola seeks his first win in the UFC after joining the organization by way of Dana White's Tuesday Night Contender Series. Facing Frevola on Saturday night will be Lando Vannata, who has built a reputation for an incredibly exciting style every single time he competes. This should be another barnburner when these two lightweights collide.
SHANE BURGOS VS. KURT HOLOBAUGH
After a blistering start to his UFC career with three straight wins, Shane Burgos suffered his first professional defeat in his last fight against Calvin Kattar. Now the New Yorker will attempt to rebound while taking on veteran featherweight Kurt Holobaugh. Holobaugh is coming off a Fight of the Night loss in his most recent outing in July, but after earning his way to the UFC by way of the Contender Series, there's no way he wants to drop two in a row.

BRIAN KELLEHER VS. MONTEL JACKSON
Brian Kelleher wasted no time jumping into the deep end of the bantamweight division after joining the UFC roster and he already holds a win over a former champion in Renan Barao. Now he faces former Tuesday Night Contender Series veteran Montel Jackson, who suffered his first professional loss in his debut in the UFC after kicking off his career with six straight wins, with five of those coming by way of knockout.
ADAM WIECZOREK VS. MARCOS ROGERIO DE LIMA
Heavyweight prospect Adam Wieczorek will try to keep his win streak alive after kicking off his UFC career with back-to-back wins as he returns to action against Marcos Rogerio de Lima this weekend. De Lima has bounced back and forth between wins and losses over his past six fights and now he'll move back up to heavyweight for the chance to hand Wieczorek his first loss inside the Octagon.