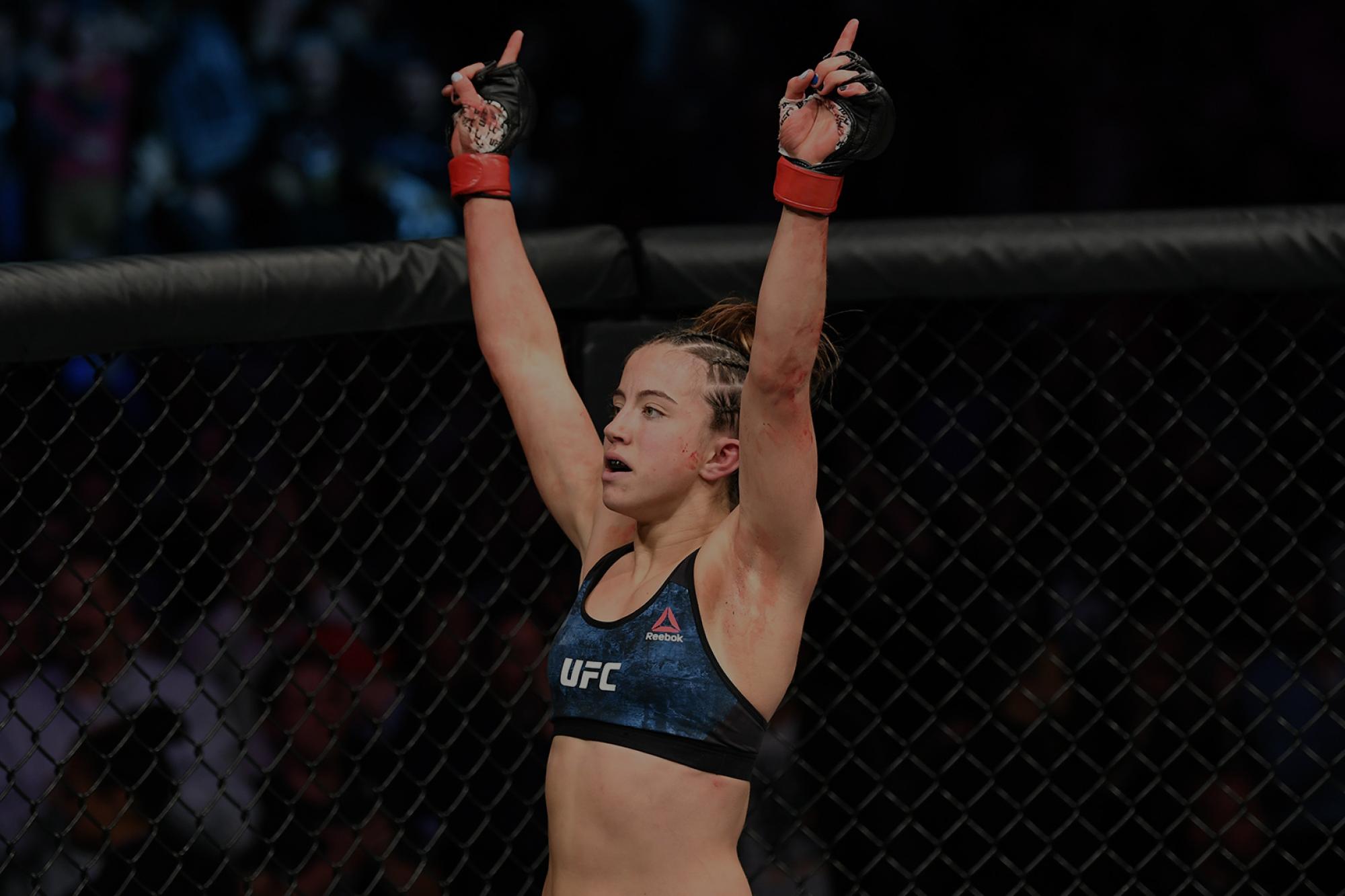 A move up to flyweight hasn't taken any confidence away from Maycee Barber.
By Zac Pacleb • Mar. 19, 2019

A few different words come up when talking about Maycee Barber.

“Shy” is not something associated with “The Future.”

An impressive second-round TKO win over Hannah Cifers in her UFC debut showed just how much power and technical skill Barber already has at 20 years old, but naturally, she is far from a finished product.

After initially missing the strawweight limit, Barber was granted an extra hour and made the 116-pound limit. Even before she stepped on the scale in Denver, she planned to move to Milwaukee, Wisconsin, in order to revamp her nutrition. On top of that, she visited the UFC Performance Institute in Las Vegas.

The takeaways resulted in a move up to flyweight, the weight class she’ll make her debut in at UFC Nashville against J.J. Aldrich. Although the move up is admittedly “not a perfect world” and Barber still plans to fight at strawweight in the future, the change has been good for her short-term health. When she prepared for her debut, Barber said she was eating around 1,000 calories per day, which “wrecked” her metabolism.

“My body was not performing on a performance diet,” she told UFC.com when she was in Las Vegas for UFC 235. “Now, fighting at 125, I was able to bump up the calories a little bit and be able to perform a little higher, so I think my performance is going to be better. And again, it’s still a process. We’re still not 100 percent to where we want to be, but it’s better.” 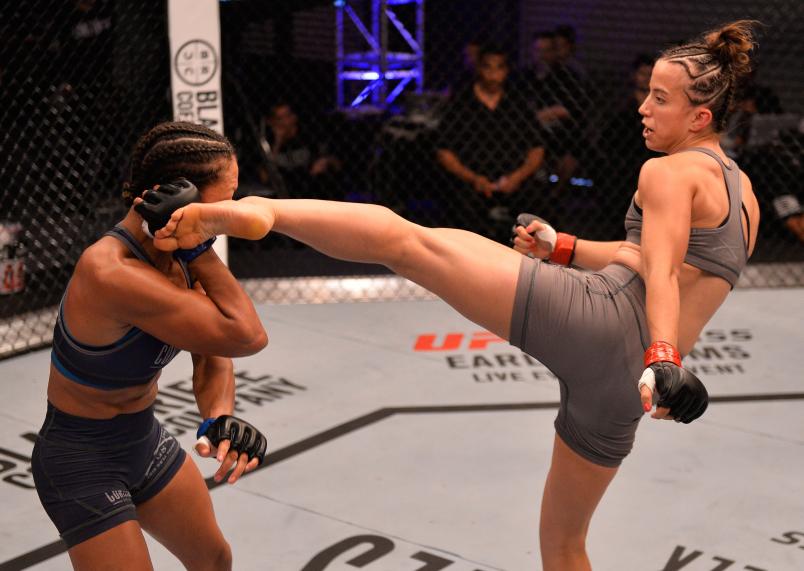 Despite the move up, Barber said she still feels like “a beast” at flyweight, and the people around her agree.

Never one to mince her words, Barber’s confidence hasn’t wavered with the temporary move up to flyweight. Sure, she still talks about staying patient and sticking to the process that’s necessary to move up the rankings, but Barber doesn’t have any sense of hesitancy in her demeanor.

From making it consistently known that she wants to break Jon Jones’ record for the youngest champion in UFC history to saying she’ll be a bigger star than Conor McGregor and Ronda Rousey, Barber doesn’t pull any punches in or out of the cage. Combined with her early success, it’s that type of confidence which earns her the buzz she generates, including compliments from UFC president Dana White, who talked about Barber in a recent interview with Megan Olivi. 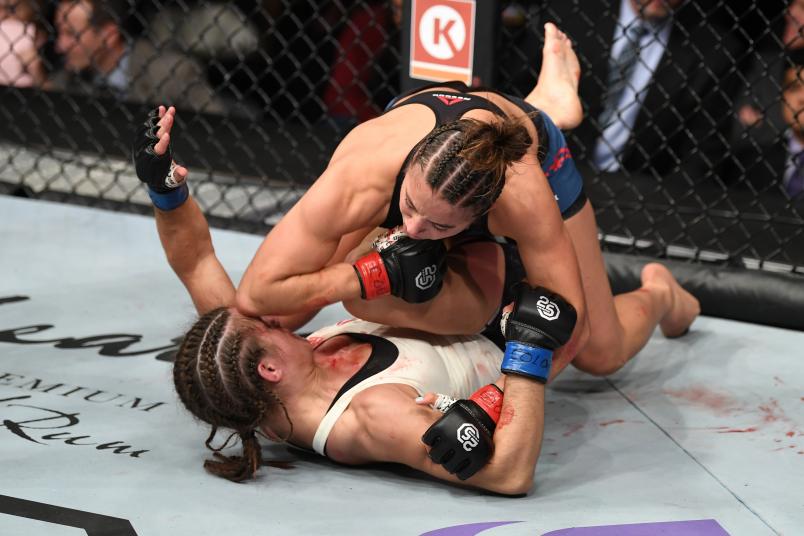 How exactly does a 20-year-old balance this brash persona with patience in her pursuit of the title? In Barber’s eyes, there isn’t really any other way to do it.

Barber said she plans to spend a year fighting at flyweight before moving back down and chasing the strawweight belt currently held by Rose Namajunas. Who holds the belt at that point isn’t certain, especially with Jessica Andrade challenging for the strap at UFC 237. What does seem likely – based as much on her words as her actual performance - is that Barber will be closing in on her opportunity for a title shot.

“If you’re confident and you’re enjoying the process and you realize this is why I’m doing this and this is what I’m going for and this is what’s going to help me help them or help me help my family or my siblings or my future family, I feel like that all together is what makes it worth it.”

UFC: After having some time to digest your first win, seems like you’ve been able to travel some and train in different places. What have you been up to since making your debut?

Maycee Barber: The last few months after my fight in November, I went out and did some testing at the (UFC Performance Institute) and got some good information about where I need to be and what I need to do for the next fights coming up, and after that,  I moved to Wisconsin. I’ve been traveling around, yes I have, a lot. I moved to Wisconsin, then I got the fight with JJ Aldrich, and so now I’m back in camp, so I went out to Utah and did some training with Matt Pena, one of my boxing coaches, and then I just continued camp with Marc Montoya at Factory X in Denver, and it’s been huge. It’s been awesome. A lot of training. I haven’t been home. I haven’t seen my family in quite some time, so I’m ready to see my family, but yeah. Florida, I went to the Daytona 500. That was an incredible experience getting to be around all the athletes there and to see the level of mentality that they have as professionals, and that was really cool. And now, I’m here in Vegas for the Jon Jones and Anthony Smith fight and for some media and for some of my own training and continuing camp because obviously Anthony has Marc, and Marc is my head coach as well, so I just kind of had to follow along.

UFC: Your plan after your fight in November was to move to Wisconsin to work on nutrition, and obviously you came to the PI to get information as well. What did you learn?

MB: Being here at the PI, it’s been incredible. The preparation that we’ve had to make and the changes that we’ve had to make are the weight class. I had to move up from 115 to 125. It’s not ideal, but we found out that my metabolism was wrecked, and so we had to make some changes for my health specifically, so that’s what we did. It’s not a perfect world. In a perfect world, I would still be fighting at 115, but I also feel like a beast at 125, and I feel good. I feel strong, and weights coming down. I’m way healthier now. That’s probably the biggest change that we’ve made is the weight class.

MB: Yeah. So, I’ll probably spend the next year (at flyweight) or so until I’m completely healed. So right now, I’m back out here testing more, and I’m not even halfway back to where we want me to be, so it’s a process. Any time you go and you diet down and you put such stress on your body for dieting and training and as an athlete, however long it took to get there, it’s going to take that much time to get it back, so I have quite a long journey of recovering, and then after that, I’ll definitely go back down to 115.

UFC: In your debut, you introduced yourself to the fans. Now that your profile is raising, how different has it been preparing for a fight knowing the debut is out of the way?

MB: In terms of preparing for a fight, it’s the same. I’m still putting in the same amount of training. I’m still doing all that side of my life because if I don’t do my job, I don’t get to have any of it. If I don’t win, if I don’t put on performances that I have been putting on, then I’m not going to have the same amount of people who want to listen. People want to watch people who have a good story and who are successful and who back up what they’re saying. The only way to back up what you’re saying is to put in the work, so there’s definitely a balance. Some of the trips that I did go on, like Daytona, it happened to land in my camp, and I had already agreed to go into that. I don’t regret it at all. I was a little bit tired the day after. I definitely felt the travel, but those are the things that you balance. Sometimes, if you’re not physically training, you’re mentally training. That was a big mental training weekend for me, and to be able to be around the mindset of the highest level, so there’s two ways to look at it. You can be like, ‘Oh, well you’re traveling a lot, and you’re more busy in terms of media and whatever,’ but as long as you get in the physical work that you need to get in, and you also take the time to I guess  take advantage of the opportunities that you get. Training has been good.

UFC: In your opponent, what do you see in her that you’ll need to manage when you fight?

MB: JJ Aldrich is a tough fighter. She definitely (has) a solid background. She does a lot of the basics, and she does them very, very well. That’s always a good thing to see in a fighter, is how solid they are in their foundation. I feel like that’s more of a dangerous fighter than someone who is really good at being super flashy, but they’re not good at the basics because when you’re flashy, you make a lot of mistakes that other people can capitalize (on) if they have the basics. She’s definitely solid in her foundation … In terms of preparation for this fight, we definitely focus on me because if you look at a film or an opponent and you focus on their mistakes and their weaknesses, they might not have those. Because if I was to look at my own film, and I’m like, ‘All right, well, here’s where I made a mistake. Let’s fix that.’ That’s what we try to attack. You try to attack your own problems, so if we’re expecting her to be a professional that she is, then obviously her and her team, they’re going to go back, and they’re going to be like, ‘All right, here’s where we messed up. Here’s what we need to fix. Let’s fix that.’ And then if I do that and I pay attention to what she messed up, then maybe she already fixed it, and she doesn’t have that same issue. And that goes for every opponent. That’s just kind of the mindset that we have, and we also want to work on where I’m good and where I need to work on, and just keeping myself great at what I’m great at, and then building off of what I’m not so great at just to kind of continue to make me a better all-around, well-rounded fighter.