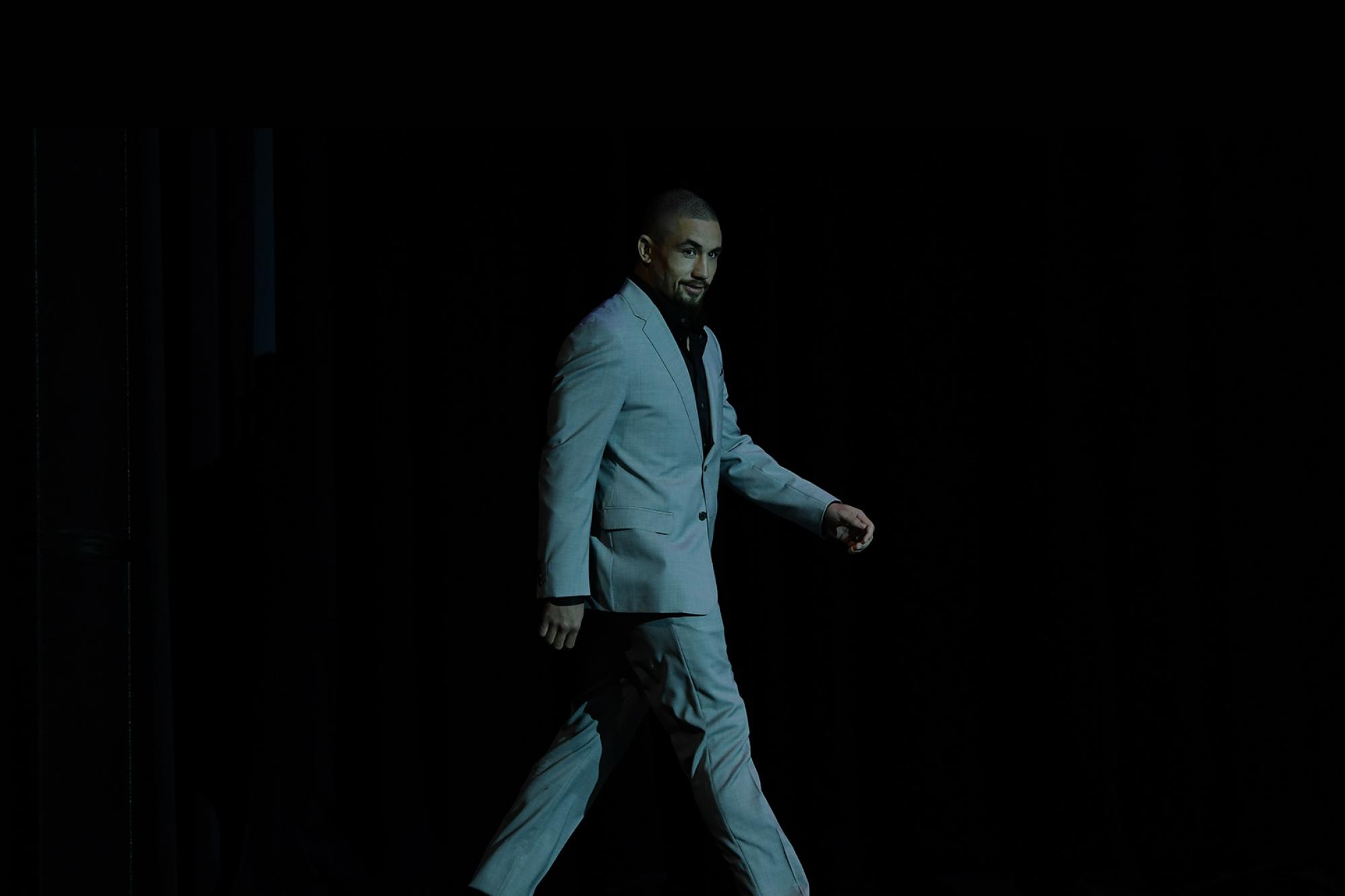 Robert Whittaker is eager to defend his belt in his home country, and he says he had a gut feeling he'd be fighting Kevin Gastelum at some point.
By Thomas Gerbasi • Feb. 8, 2019

At one time, Kelvin Gastelum didn’t want to move to middleweight from welterweight, determined to challenge for gold at 170 pounds. Yet the man whose title he is fighting for in Melbourne this weekend, Robert Whittaker, welcomed the move back in 2014.

“Moving to middleweight was a great decision for me primarily because the weight cut was taking a lot out of me,” said Whittaker. “It wasn’t until my second (UFC) loss that I realized how much it was taking out of me trying to make the welterweight division. So when I moved to middleweight, a lot of lifestyle changes were taking place at the same time. I was eating better, I was able to enjoy life a lot more, but funny enough, at the same time, I met Fabricio Itte, who put me on a different track. He came onboard as my high performance coach, and since meeting him, we’ve been on a steady rate upwards.”

Robert Whittaker admits his upcoming title fight against Kelvin Gastelum at UFC 234 will be his toughest test yet.

Big things were always expected from the TUF Nations winner, who won his first two UFC bouts at welterweight over Brad Scott and Colton Smith. But after a split decision loss to Court McGee and a stoppage defeat at the hands of Stephen Thompson six months later, it was time for a change. Whittaker would fight once more at welterweight, decisioning Mike Rhodes, but then he moved up.

And that extra 15 pounds has made all the difference for the 28-year-old, who is 8-0 with four knockouts at middleweight. More importantly, that unbeaten run includes a world middleweight title that he defends against fellow TUF winner Gastelum in the main event of UFC 234 in his home country of Australia.

Born in New Zealand, Whittaker has called Australia home since he was a youngster, and he’s never left, along the way shattering the notion that Aussie fighters have to go elsewhere to get the training necessary to win a UFC title.

Go back to the night Robert Whittaker put his name in the record books, as he defeated Yoel Romero at UFC 213 to become a UFC champio.

“I think it was a misconception that a lot of Australian mixed martial artists needed to leave Australia to try and get the training that everyone else is doing, and I’d like to think that I’ve proven that wrong,” he said with a laugh. “There’s no wrong or right, it’s just that it is possible to do it from here. If anything, maybe people should come here.”

Maybe they should, because Whittaker’s body of work has been flawless over the last four-plus years. Knockouts of Clint Hester, Brad Tavares, Derek Brunson and “Jacare” Souza; decisions over Uriah Hall and Rafael Natal. But it was in his last two wins over Yoel Romero that Whittaker truly arrived.

“Yoel Romero is a hard fight for anyone,” said Whittaker, who went ten rounds with the Cuban killer, taking Fight of the Night bonus checks in both. “He’s a tough dude. I was hoping he would slow down with age, but it didn’t exactly play out that way. (Laughs) I don’t know why I’m the only one to beat Yoel Romero (in the UFC), but I do know that I trained my ass off constantly for both of those fights and for every fight I’ve gone into. I took Yoel Romero’s best shot on the chin and I still won.”

Wobbled by Romero and by Brunson, Whittaker still found a way to win the fights, and that’s what makes him a champion. But Gastelum believes he has the power to not just dent Whittaker’s chin, but crack it.

Whittaker isn’t buying such logic from the challenger, but he does know he’s in for a fight, one he knew a long time ago that would ultimately happen.

“I had a gut feeling I was gonna fight him as soon as I saw him,” he said. “I don’t know why that was, but I always thought we were gonna have to fight.

“I think he’s a great fighter,” Whittaker continues. “I think he’s hungry, he’s strong, he’s young and I’m gonna have to bring my A game to put it over him.”

Don’t get Whittaker wrong, though. He respects his foe and he’s ready for a fight, but it’s a fight he expects to win, and if Gastelum isn’t at his best, it might be a quick win for “The Reaper.”

“It’s gonna be very explosive,” said Whittaker. “He (Gastelum) needs to be all-in for this fight. Otherwise he’s not gonna make it through the night.”